Áine Kelly-Costello: Here’s what I learned when the muckrakers united 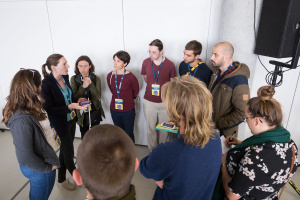 I stood or sat, phone in hand note-taking or exchanging contact info, in a sea of reporters listening to each other. I perched on cramped benches, sometimes on the floor, a chair if I was more punctual and decisive than usual about session selection.

There we were, 1700 investigative journalists, academics, non-profit directors, students, others connected to the field, converging into a noticeably finite amount of space. The vibe was disconcertingly friendly, and networking sessions were timetabled in for you. I sometimes remembered to eat.

In the blur of four days in Hamburg at the 11th Global Investigative Journalism Conference, here’s a snapshot of what jumped out for me.

1. Collaboration is the future. It’s also a tangle of logistics

Collaboration was a buzz-word, and I think it contributed to the sense of openness, and the lack of hierarchy that came across during the conference. As a blind journalist, collaboration is more a survival strategy than a nice idea for me, so this literal assurance that I was not alone was encouraging.

Sessions for networking, as well as collaborative strategies, between journalists and NGOs, locally, cross-border, and global featured prominently. Strategic tips, paraphrased by me, included:

Also, if you can help it:

2. What’s keeping you awake at night?

It was also reassuring to see verification and fact-checking play a central role in the presentation line-up. Editors, we heard, who are satisfied that reporters have individually fact-checked themselves without seeing proof aren’t being thorough about their job. For investigative reporting in particular, that should mean resourcing line-by-line checking of stories, and also frame-by-frame if there’s a visual component.

But, Nils Hanson from SVT (Swedish Public Television) advised, once you’re done with that, there’s one more question a vigilent editor can pose to the reporter (I may be paraphrasing slightly):

“What’s that nagging detail keeping you awake at night?”

3. Try the thing that didn’t work two years ago

Sage advice that was true for many organisations at a particular time in a particular place is worth listening to, but making time for regular, considered experimenting pays off, too.

This was a tip from Monika Bauerlein, CEO of American long-form Magazine Mother Jones. She said that against-the-grain strategies from writing longer-than-advised emails to readers, to revisiting Facebook and Twitter fund-raising in 2019, have paid off for the magazine. She also emphasised that readers were far more willing to give the magazine much-needed money when the organisation was open about its strategy and rationale for pursuing reader-funded independent, well-resourced reporting on priority topic areas.

Edward Snowden’s leaks, six years ago, revealed the potential significance of metadata to the world. I wasn’t really paying attention then, but when Paul Meyers of the BBC demonstrated just how traceable even a photo’s metadata is (where taken, when, by what device etc.), I naturally feel more stalked by my own phone. The intended message, no doubt, was to not underestimate what you may find hiding in metadata should you decide to comb some during an investigation, along with practical tips for doing that.

I’m likely to freelance sometime in the near future, whether by accident or design, making me a sponge for practical advice on the matter of how to get a foothold.

Saudi freelancer Safa al Ahmad pointed out that if you’ve helped someone out in the past, they’re a lot more likely to remember you. Obviously, there are ethical and unethical ways of giving help, but keeping in mind that your dinner conversation mate now might just be your future collaborator or editor is in your self-interest.

Another speaker, I think it was Mark Schapiro from UC Berkeley, advised finding a rather obscure niche, and updating yourself regularly within that niche – reading journals, court-cases, anything. that sounds like a sensible way of spotting angles the rest of the world’s freelancers might not have seen yet.

6. Talking to the camera

In a session on interview techniques, veteran reporters Cheryl Thompson of NPR and Scott Zamost of CNBC both hammered home the need for honesty and building trust with sources, especially for encouraging them to talk on camera. Also, Zamost added, it’s worth checking why, exactly, they may be so reluctant to talk to you; it might have little to do with the subject matter and a lot to do with how they think they look on camera.

Thompson also had two other tips:

7. Looking for the human angles on climate breakdown? Ask the communities most affected

This shouldn’t be newsworthy advice by 2019, but I think it bears repeating, especially as it’s a message I’ve seen struggle to break out of campaigning bubbles into mainstream reporting. From the Democratic Republic of Congo to Bolivia to the (Norwegian) Arctic, presenters emphasised the need for more climate stories centred on people and communities. That means stories about impacts, but also about creative but necessary forms of adapting, where we find and profile those new ways of living.

This hashtag was the rallying cry of the Conference keynote, delivered by Philippine reporter Maria Ressa.

Ressa, CEO and Executive Editor of Philippines news site Rappler, speaks from an epicentre of such attacks, having herself been turned into a prime target through her unapologetic coverage of the drug war and pro-Duterte propaganda.

“I have done nothing but be a journalist,” she reminded around 1700 journalists that night—”I have committed no crime.”

“Our battle is your battle,” she continued.

“Protect the rights guaranteed by our democracies or watch them slowly erode in plain sight. This is the challenge for all of us today … What can we put in place today to protect our tomorrows?”

9. The women behind the reporting

The most powerful session I went to, the one that was about finding vulnerability and solidarity and courage, was called survival strategies for Women Muckrakers. Ten award-winning women investigative reporters told us about their personal experiences. They talked about the burn-out that they spent years not talking about, being a working mother, taking your own security seriously when no one is resourcing it, processing covering violence when men conflate emotional reactions with weakness, investigating your own rape, and a lot more.

The session operated from the premise that it’s not just the tools and techniques that we learn from, it’s also how we, as humans (as opposed to, say, computers) handle actually doing all the stuff we’re talking about. Obviously this time the focus was on the shared experience of being a woman. But I believe considering this streak of sharing human learnings as an integral component of the conference in future has the potential to create more trust, closer bonds, and better investigative reporters. It’s about leveraging tools to build each other up while showing us what nurturing well-being, resilience and solidarity looks like.

10. Not just turning up: full participation means planning and care

I have a vague idea about how hard the three Conference organising partners, and numerous volunteers, worked to make the Conference truly global, a great networking opportunity, and appealing to a variety of interest areas within IJ.

Here I’ll zone in on my own experience. When I emailed the organisers to find out if volunteers could show me, as a blind attendee, between venues and where the food was, they suggested I could bring someone with me to the conference for that purpose. So I went with my friend and classmate Ariadna, and, apart from her astute observational skills which will make her a wonderful investigative reporter in her own right, I seriously would have struggled without someone else looking after the logistical side of figuring out the bus+train+walking from accommodation to Conference, and the logistics of getting between the multiple Conference and meet-up venues. Without that help, it wouldn’t have been impossible to participate, but the logistical side would have been draining and time-consuming.

Technology, in the form of the Conference app Whova, was also extremely beneficial, particularly for contacting other attendees. Whova wasn’t entirely screen-reader accessible, but its digital networking powers were still significant.

I’ve provided Conference feedback about the importance of planning for accessibility within all aspects of the event organising, as well as making space for disability-related reporting topics and networking within the main programme, within a stronger diversity and equity focus lead by marginalised journalists. A reduced registration fee for student attendees and others from low-income backgrounds within countries not eligible for travel subsidies would equally have been welcome.

So there is space to improve, I won’t sugar-coat that. But the organisers’ commitment to facilitating a truly friendly, non-hierarchical-feeling environment where investigative journalists and others connected to the field could learn from each other and spread ideas was laudable. I have the responsibility to be a more astute, careful, creative, patient and courageous reporter as a result.