“The shamelessness of Trump is an innovation”

3 Questions to Scott Lewis, Editor in Chief of the Voice of San Diego – about Trump and the media, the new role of journalism and how to deal with a constant stream of lies. By Jana Luck and Miguel Helm, JONA/KAS 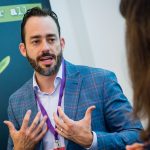 Whereas some people say, the media are lying, other people – like you – say, Trump is lying. How can these two groups get into dialogue again?

I think that the mere declaration of different statements is not helpful. To say “he is lying” doesn´t achieve anything.

We have to share the same conversation. There has to be more shared experiences. Like the hearing of the former FBI-director: that´s something that everybody watched and had to deal with and there were a lot of completely different takes that came out of it. That´s fine, but saying “he´s a liar”, “he´s not a liar” or “the media is the enemy”; that´s not going to lead anywhere.

Journalists need to show their work and explain their concepts. I also think entertainment is really important – if you can pierce through the whole noise and stand out as something that is attractive and entertaining, you can rebuild some of that process of cultural understanding.

Trump is constantly lying. Why are there not consequences of it?

What would the consequence be? Impeachment? Impeachment characterizes a criminal prosecution; but it really is a political decision. I think it´s too early to expect that a party would turn on a very recently elected member of their party who is now president. They are simply not willing to yet.

Humility from Trump, would that be the consequence? I think that´s what we are all expecting, right? We´ll do a big story and he´ll be like “boy I´m sorry I did that” – but he´s never going to do that. Not him. Trump would never show humility.

Trump´s shamelessness is one of his best political attributes. Politicians before him got into trouble because they lied about things and then the lie became the bigger issue. Not Trump. The shamelessness of Trump is an innovation. What we are learning is that a lot of the things, the norms and rules that we had, were all just based on this: norms and rules. Not on law.

How should the media deal with the fact that politicians don´t need them anymore to voice their opinions, that they can do it directly, just as Trump does via Twitter?

We can´t stop that. It´s gonna happen. And somebody is going to be even better at it than Trump. I think our role as a journalist changed. Being the funnel for information, taking information from one person and giving it to another – that job is over. That´s gonna happen automatically or through other techniques. I think our role as media is now split into two parts. One: To make sense of what is said. And two: to find out what is not said, what is not wanted to be said.