Dankesrede von Can Dündar / Acceptance Speech by Can Dündar 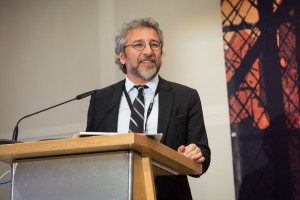 I sincerely thank Mr. President, Martin Schulz for his kind speech treasured with a strong sense solidarity that I must say I am very honored to receive. I also extend my many thanks to my German colleagues for awarding me such a prestigious prize.

I came here from a country known as one of the world’s biggest prisons for journalists.

We have 35 journalists behind bars today; many others are waiting for their turn.

I was one of them 6 months ago; a prisoner of thought whose only crime was telling the truth to his readers…

If you’re a journalist in Turkey, you dig your grave with your pen, with every honest word you write…

Every sentence you frame, every document you bring to light, every lie you expose gets you closer to imprisonment or even death.

My paper lost 5 of its finest writers in horrible attacks in the last 30 years. But we did not give up the fight to carry on their legacy and the tradition of bravery in the face of oppression.

Because, in the lack of a strong opposition, organised civil society, and influencial, impartial institutions , media is one of the rare tools to safeguard the truth against lies, press freedom against censorship, and a democratic society against islamofachism.

Yesterday at the boat trip, a journalism student asked me about the risks of being a journalist in Turkey.

Revealing the truth may put you in prison there… But at the same time it may bring you to Hamburg, to get Leuchtturm Award, from investigative journalists here, who care for the suffering of their colleagues in every corner of the world.

Taking the risk of telling the truth, especially if your efforts are being suppressed, echoes one’s voice to all, by making you a part of a big family of journalists with a burning ambition to fight against the oppression in the name of democracy.

İn prison, I felt the strong presence of the family of writers from Cervantes to Zweig from Dostoyevsky to Nazım Hikmet who were exiled, punished, imprisoned, because of their beliefs, their writings… But in the end, humanity remembers their names, not those of their judges’ or prosecutors’.

And today, I feel the solidarity of a family of journalists, from Netzwerk Recherche to Reporters Without Borders, who are ready to support the freedom of press and expression everywhere in the World.

İf we do not want a World governed by Le Pen, Farage, Putin, Erdoğan, Trump, a World, threatened by raising nationalism and racism, we have to get together, support each other’s struggle, and coordinate our efforts to be stronger against repressive governments.

We need to find new ways to give voice to those stripped of one, to communicate with each other, to overcome censorship.

We should follow-up with censored stories and shed a brighter light on them.

We need exchange programmes between journalism schools to sow the seeds of much needed transnational solidarity in the profession,

We should print articles from imprisoned journalists and refuse to leave them alone.

International solidarity is a priceless protection, for a journalist under attack by his or her government.

As Mr Schulz said this award is a message to the government of Ankara:

“Do not count on the German government’s backing against the core values of democracy. We’re here to defend the freedom of press…”

And it’s a message to all freedom fighters in Turkey:

Thank you for giving us that sense of solidarity.

Thanks for your enduring support, from now on, we’ll be digging with our words, not our graves, but a tunnel to take us out of the World’s biggest prison, to a free future…